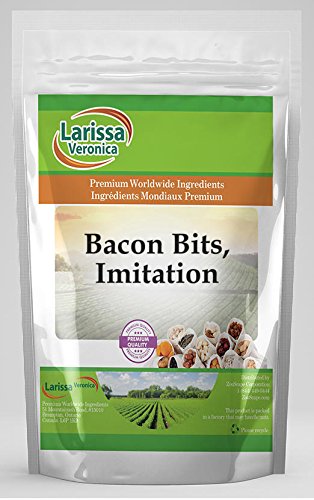 Our imitation bacon bits are made from soy. You can use them wherever you might have used real bacon bits. Bacon bits are terrific with omelets, scrambled eggs, salads, pastas, baked potatoes, snacks, and more. - Larissa Veronica is an exclusive line of natural premium-quality products that use only the purest and finest ingredients from around the world. Larissa Veronica is hallmarked by the highest possible standards of purity, stability and freshness. All of our products are prepared with the highest elements of quality control, from raw materials through the entire manufacturing process, up to and including the moment that the bottles or bags are sealed for freshness and shipped out to you. Our highest possible standards are certified by independent laboratories and backed by our personal guarantee. - Larissa Veronica strives to make all products affordable and we are constantly researching the market to maintain our affordability and to look for new ways to serve you and the ones you love. Larissa Veronica has become a trusted household name for many families. - Larissa Veronica is packed in tamper-proof, food-grade, recyclable containers. - ZooScape is proud to be the exclusive distributor of all Larissa Veronica spices, snacks, foods and ingredients in the United States, Canada and around the world. - Store Dry at 55-65 F. Kosher Pareve. Vegan. Product of U.S.A.

This is an exciting time for fans of Terraria and Dungeon Defenders as the lands of Terraria and Dungeon Defenders 2 cross paths! Terraria will be taking on an all new event with many elements from DD2. This event promises to have something in it for everyone new and experienced. A mysterious portal opens and from it come the creatures from the land of Etheria, bringing to Terrarians:

Dungeon Defenders 2 will also get Terraria related content with weapons, enemies and our resident Dryad paying an unexpected visit to Etheria.

The 1.3.4 update will also bring some stunning visual improvements to the physics of water interaction.

The expected release for this update is November 15, but can change if developers can't achieve this goal. Confirmation should come as the date gets closer. In the meantime, Enjoy these awesome peeks at what's to come!

In the top image, there is an impressive lodging with some new faces inside. There's lots of new objects within this structure to speculate about. In the second image, we get a peek at the new event, the portal, some turrets, enemies and perhaps even a new weapon.

1.3.2 is out and it's party time! Re-Logic brings us a small update with the promise of another update on the horizon that will expand the underground desert biome and more! So visit the Party Girl sometime to get things started.

1.3.1 is getting closer to completion and a little spoiler video with some news has been released. Re-Logic has revealed a list of fixes/tweaks left to be taken care of and once that is done, 1.3.1 should be up and running! This update largely focuses on controller support and some neat wiring mechanics. While this won't be a large update, Re-Logic has hinted at 1.3.2 and more for the future. Take a look at the amazing details of an adventure map in the video below:

One of the more interesting features shown in the video is the Granite Golem statue placed in the background. This could possibly mean opportunities for other enemy statue discoveries. 1.3.1 is just around the corner...

1.3.1 is on the way! Over the past few months we've heard increasing amounts of info regarding what will be coming with this update, which the developers have taken to calling the "Wiring Update". Among other things these features are what have been revealed to us thus far:

Mac and Linux Terrarians, your day has finally arrived!

Re-Logic staff are thrilled to announce that they are officially launching the Mac & Linux versions of Terraria today! This has been a very long time in coming - and they know how very much the Community has desired these new Terraria platforms, and are eagerly looking forward to hearing your reaction. :)

Also note that this will be Terraria 1.3.0.8. This version ensures compatibility between Mac/Linux and Windows - no other substantial changes come with this update. The dedicated server software links are below:

Earlier this month, the above trailer was posted on the Terraria Community Forums to tide us over until the release of the long-awaited 1.3 update on June 30!

Highlights of this video include:

Additionally, it was announced at the end of the TCF post that Mac and Linux support are planned and are supposed to be coming sometime next month.

But that isn't all! Yesterday, another post was made on the TCF which contained something arguably even more interesting: a changelog for 1.3. This post contains all sorts of details about the next update, including info on the workings of Expert Mode, revamped NPC mechanics, bugfixes, crafting tweaks, and more! If you don't mind the spoilers, it is well worth your time to check it out!

An interesting post on the Terraria Community Forums contained the following video:

At first glance, this video seems to be intended to show off a redesign for the Underworld. However, a much juicier detail came at the end of the video: Terraria 1.3 will be releasing on June 30, 2015!

im on nintendo switch but i don't use discord.

Tips and tricks for bosses